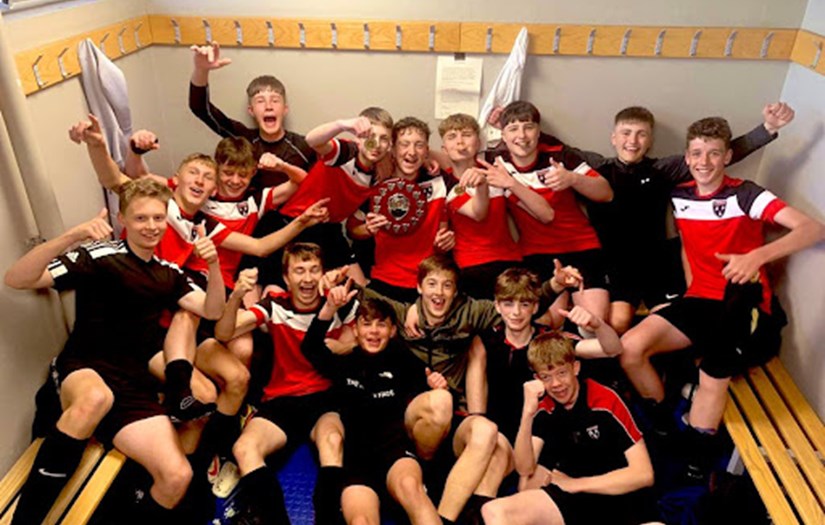 Ponteland High School’s football success continued with the Under 15 League Final, which was a classic match that will be remembered for a long time. Two very strong teams came together to contest the final; they were so evenly matched that nothing could separate them at the end of the game.

The Dukes started the game better than Ponteland. They dominated possession, kept PHS in our own half for the majority of the time and after a sustained period of pressure they were rewarded with a superbly worked goal from a corner. In the 33rd minute Ponteland began to gain some possession and confidence. Harry A scored our first from open play on 35 mins and we went into halftime with momentum and a growing belief that a win was achievable.

Both teams started the second half well with opportunities at both ends of the pitch. Lewis S’s goal line clearance would have made MOTD and they would have been debating the merits of VAR for hours!  A shot/cross that had beaten all our defenders but ‘Lewis -never say die - Stanley’ tracked the ball all the way and saved the team. Not long after this, such were his efforts that double cramp in the calves ended his contribution. Spurred on by this inability to give up, Harry A scored another goal in the 50th minute and we began dominating possession in midfield while the defence marshalled to nullify DUKES star player. In the 73rd minute DUKES found a bit of space in front of goal and drew level.

Both teams were nervous throughout the two periods of extra time. Neither team had a clear opportunity to win the match and in fading light we were heading into penalties. Adam H was clearly enjoying this experience in goal and was doing everything he knew to appear big in the goal and show DUKES that he was in charge. Alfie F, captain, won the toss and confidently chose to go first to put the pressure on DUKES.

Joe A scored our first, Harry A scored the second, Adam H scored the third, Robbie K scored the fourth… Someone asked the question, what happens if everyone scores? DUKES hit the POST!!! This just left the Captain. Alfie already had a plan before he walked forward and he executed it perfectly. Before you knew it there was a pile up of bodies in the corner of the pitch in front of a significant number of excited parents and friends who had made the journey to lend their support.

Mr Dunn, Head of PE said, “It was good to see the sportsmanship and team spirit at the end of the match with both teams recognising that they had played a very special match. Particularl thanks to the parents and supporters who came to see the match and especially to Mr Rainey for taking responsibility for offside decisions. It has been a real pleasure to take this group and we’re looking forward to the Under 16 season,  well done everyone!”