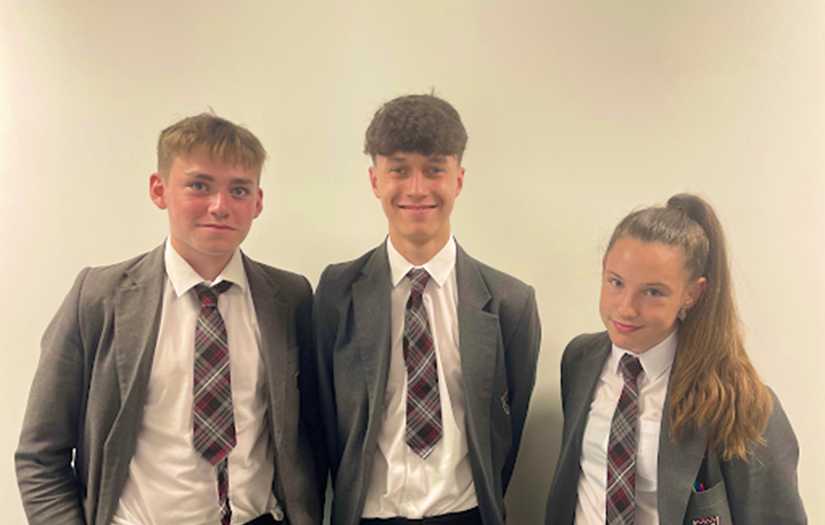 Three of our year 10 students competed at the Northern Schools’ Inter-County Athletics Championships at Gateshead Stadium on 21st June. Leighton, Elliot and Lucy were representing Northumberland after qualifying at the County Championships earlier that month. The students helped Northumberland to an overall win against the competing counties of Cleveland, Cumbria, Durham and North Yorkshire.

County Champion Leighton N., finished 5th in the 4kg shot. Elliot K. followed up his 3rd place at the County Championships to finish 6th in the 1500m. Lucy M. once again achieved County Standard in the 300m, finishing 3rd in a time of 44.7s, with only 0.7s separating her from 1st and 2nd!

A week later, our year 7 and 8 students competed at the County Championships, representing the Tynedale area of Northumberland. This event was also held at Gateshead and for many, this was the first opportunity to compete at an international standard stadium!

For the year 7 boys, there were some superb performances on the track. Harry D. achieved district standard with a big personal best of 5 mins 07secs in the 1500m. Matthew S. finished 6th in the 800m and Jamie W. finished 3rd in the 75m hurdles. For the year 7 girls, Alice W. finished 5th in the 200m final, only just missing out on the school standard. Lois B. was second in the 800m achieving school standard.

In the year 8 events, Joseph H. finished 2nd in the 100m final after winning his heat, also achieving the district standard. Joseph was also part of the winning 4x100m relay team. On the field, Isaac Y. achieved school standard in both the javelin and the 4kg shot. Both Frances E. and Nuala B. competed in the 800m, finishing 2nd and 7th, respectively, with Frances gaining district standard. Abi K. jumped her way to 3rd in the long jump, achieving a county standard!

P.E. teacher, Ms Byers said, ‘It’s an incredible achievement for our year 10 students to compete at the inter-counties, they should be really proud. They are also great role-models to the younger students. I’m really looking forward to seeing these students progress as they move through the school.’