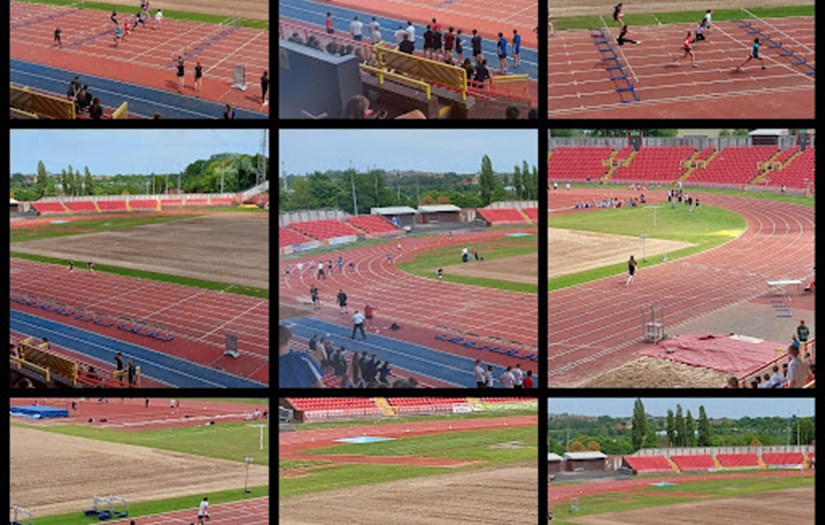 Ponteland High School had an impressive 54 athletes across four age categories compete in the first round of the English Schools Track and Field Cup. The competition was held at Gateshead Stadium, the same track which hosted two elite level Diamond League meetings in 2021. Our students competed in a host of track and field events; everything from sprint hurdles, to middle distance and from triple jump to javelin.

For our Junior athletes, many were trying out track and field events for the first time. However, students did not let this deter them from competing with flair and determination. In the girls’ 200m, only 0.3 seconds separated 1st to 3rd, with Meadow R. winning in 29.6, closely followed by Abby P. (3rd) in 29.9s. Our Junior girls also showed their talent in the middle distance with a win for Frances E. in the 800m. Frances won in 2:34.7, almost eight seconds clear of second place!

Elliot won the intermediate boys 1500m in 4:35.6, over 11 seconds clear of his nearest competitor. Impressively, this was just three days after he set a new PB of 4:17.44 at the North Eastern Counties Athletics Championships!

In the Intermediate girls, Erin B. had a fantastic run to win the girls 1500m in PB figures of 5:18.1! Lucy M. was pipped to 1st place by only 0.1s in 300m. This was an impressive run from Lucy, who has only recently moved to the sprints from middle/long distance. The girls also showed their strength in the field events with impressive long jumps from Lousia H. and Isla G.

Miss Falloon said, “I am incredibly proud of our students. It was fantastic to see so many of them step out of their comfort zones and compete in events that are totally new to them. It is set to be a very exciting season of athletics!”