During the October half-term Hugh spent Monday to Friday doing an exciting course called ‘Mission Discovery’ with 2 astronauts from NASA and a colleague who works in mission control in NASA. The aim of the week was to design a project which could get sent to the International Space Station (ISS).

The two astronauts he worked with were Michael Foale (left) and Barbara Morgan (right). Both were incredible inspirations to work with as Michael had managed to survive a collision in space aboard the Mir space station and was one of the first British astronauts in space, whereas Barbara was the first teacher in space!

Sarah Murray was the other NASA colleague Hugh was working with from Mission control in NASA. She is currently working on the Artemis 1 mission set to launch in February 2022, which will seek the first integration of NASA’s deep space technologies in the hope of extending our reach to the moon and beyond. With the help of PhD research scientists they designed experiments to be considered for use aboard ISS and the Blue horizon spacecraft.

Hugh thoroughly enjoyed his week and strongly recommends it to other students if you’re thinking of any sort of career in Science, Technology, Engineering or Maths!

Headteacher, Mr McGrane commented: “Hugh has been proactive in seeking out this opportunity after hearing about it from one of his Physics teachers in school. He applied and secured a place on Mission Discovery and has experienced what few others will have. Hugh is a great example of the best of our 6th form students; he is positive, hardworking and willing to operate outside of his comfort zone.”

Hugh with Sarah Murray (NASA) below 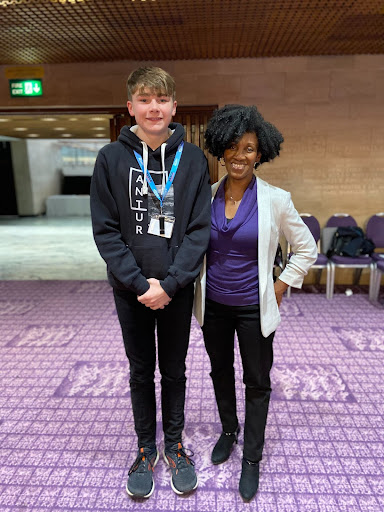