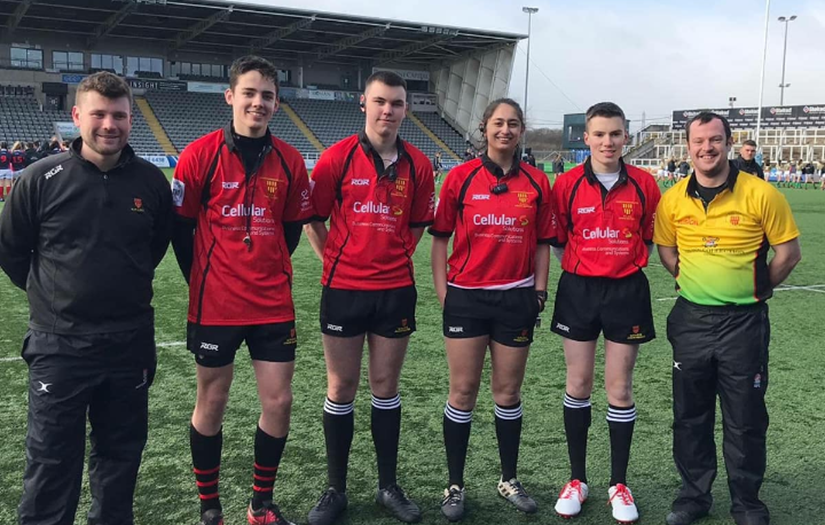 Y12 student, Morgan, started refereeing after he decided to stop playing rugby to focus on other sports; he was subsequently recommended to do the referees course by a friend. He managed to get in one county girls match before Covid hit but since the start of this season he has refereed six games with one being his first adult game, which was between Ponteland and Blaydon women. Morgan has more games lined up to referee in the weeks and months ahead.

He loves refereeing as he is still involved in the game without having to play and has met some people who he gets along really well with and who push him to get better as they want to see him achieve what they think he can which really motivates him.

Morgan is a member of the Northumberland Referees Society and does club and school matches. He progressed through a RFU referees course to gain a qualification to referee matches. She is part of the Northumberland Referees Youth Match Official development programme, which is used to develop skills whilst being watched by mentors who give him tips to work on after games to aid improvement.

Morgan is currently a level 10 referee, which allows him to do level 10 matches; this can be both junior and senior level. His ambition is to move up through the levels to level 1, which is professional premiership level and then progress to European cup matches and hopefully international games. To move up through the levels Morgan needs to be assessed at each level and get good reports. His inspiration is Luke Pearce who is an English referee working in premiership, european and international matches; Morgan spends a lot of time watching him in matches to learn from him. The highlight of his time refereeing has to be his  first match; the girls county match at Kingston Park Stadium, the home of the Newcastle Falcons, the team he supports. The photo above is from that day.