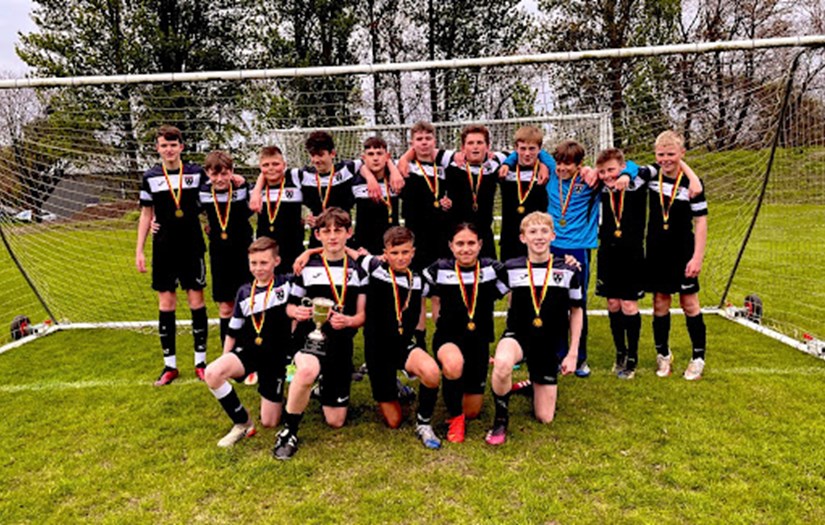 Player of the Match: O. Davies

The U13 team brought their impressive form this season into the Dawson Cup County Cup final on Wednesday evening. The team put in a very convincing display from start to finish and thoroughly deserved their victory.

The game started well and Ponteland won the key battles in the middle of the park, with no team really threatening. The Ponteland backline were untested playing against one forward who created little, while the Morpeth backline were also preventing any chances. Ponteland grew into the game and had a goal ruled out for offside, before a series of corners created opportunities. McGuire constantly put threatening balls into the box and both Johnstone and Davies went close with good headers. The breakthrough came following another corner by McGuire, in which Mason found space and cutely volleyed home with the outside of his foot to give us the lead. Davies went close soon after with a thunderous effort but as the first half came to a close it more of a case that missed chances could cost the team, especially after Newminster beat the offside trap late in the half before Gray collected the ball.

The second half started even and Newminster grew into the game, competing well in the midfield, without carrying any real threat. However, it was Ponteland who scored the second when a shot by Mason from the edge of the box was parried to the onrushing Wood, who had been outstanding in the first half, to follow up from close range. Again, the school from Morpeth responded well and it was only after an outstanding save from Gray, which kept the score 2-0 probably sucked the life out of the opponents. Philipson came on and played a great pass into Mason, who showed his calmness in front of goal to round the keeper before another assist by Philipson, who set up Wood to fire from the edge of the box which crept past the keeper. A fantastic evening, a solid performance and fantastic contributions by everyone in the game ensured the County Cup, the first time Ponteland High had been able to enter the U13 cup were crowned Champions.

Paul Dunn, Head of PE, commented, “The team have had a tremendous season so far and this was a fantastic way to finish by winning the first of two cup finals. The County Cup is the final you want to win every year and to do this in the manner in which we did was excellent. The performance was very good and every player played their part in the game. We have overcome some difficult challenges in the competition but showed great determination throughout.”