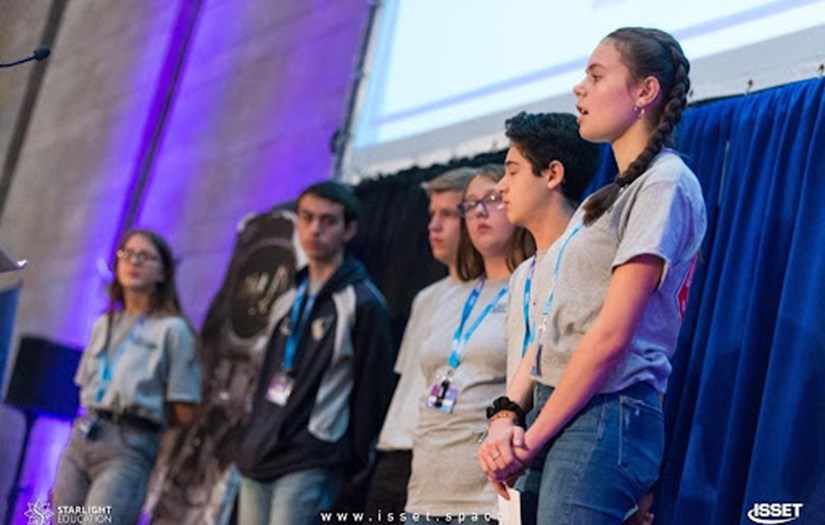 On the first day I arrived at the Civic Centre and we were sorted into groups of six. I was with five people I had never met before who came from all over; whether from North Yorkshire or Oxford. That first day was all about building your team and leadership skills (I was really lucky as my team just clicked immediately, though that seemed to be the case for everyone).

The main thing we did on the first day was the Mars landing challenge (egg challenge). We had to get a certain amount of material from your team's money (£1 million per team) and make a structure that would save the egg from cracking when dropped from a height. Throughout the day many people from Nasa talked to us and helped us; for example, astronauts Barbra Morgan and Micheal Foale talked to us about their experience in space, their training, and their life as an astronaut.

Day 2 was when the hard work really started, we were told our experiment could launch in the Origin Blue, be in microgravity for 4 minutes and come back to earth. We chose to send our experiment to the ISS so this was our introduction to our Design Brief:

On day two we did a huge mind map and brainstormed together, which was really fun but we still didn't have any ideas by the end of the day.

After lots and lots and lots of research we had to finalise our idea (in theory). We worked until the last second, always changing it or finding new flaws in the plan. So, when we more or less had a method we needed to find places that NASA could purchase what we needed and how much it would cost.

This was all about presentation; building our presentation, practising it, changing things around, we did some exercises to work on our presentation skills. And we all practised going through the presentation together. Throughout the entire week we had a mentor who helped us and talked to lots of professionals to make sure our idea was viable. The idea we settled on was : How microgravity would affect degradation of biofilms.

This was ‘the big day’!! I have to admit I hate presentations so I was really nervous about this. We were split up into groups so 5 groups would go with one judge and they would judge it and all the judges would then report back together. I don't know how many groups there were but 350 or so students were split into groups of six and only 5 groups would be going into the next round.

We made it into the second round, which none of us could believe and at this point everyone was all back in the main hall and loads more people like the Mayor of Newcastle had arrived and they immediately started doing the first group's presentation. We had six minutes to do the presentation with questions at the end and the lights turned red when you were out of time, and you were performing in front of EVERYONE -  so no stress, you know!

Anyway after all the groups had gone, and let me tell you the ideas and presentation skills were amazing, the judges came back and announced we had won!

Throughout the entire week Mike Foule and Barbra Morgan told us about life in space and their personal stories and we heard from Sahra Murray from mission control. Furthermore, many more people came in with inspirational and interesting presentations including Buzz Aldrin's son, Andrew Aldrin, who talked to us about his childhood and future space colonization and market. All the speakers also went around our groups and heard our ideas. Mentors from all over also came in to help us with our designs and hear them and talk to us.

Afterwards Emilie said, “I learnt so so much from loads of different people there, you do not need to be particularly genius or anything to do this, just have a genuine interest”