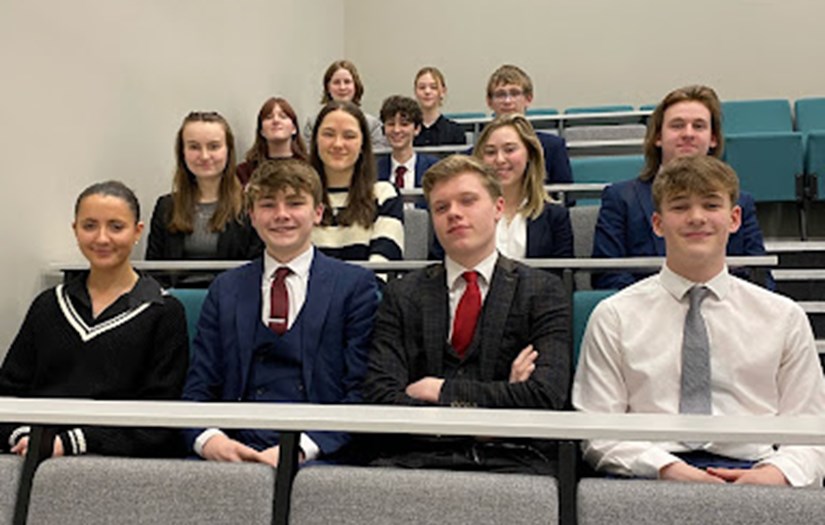 On Tuesday 29 March, the Ponteland High Bar Mock Trial team left the classroom behind and entered the (virtual) courtroom. 13 x Year 12 students participated in the regional competition where they presented the case for the prosecution and defence of Regina v Summers, and Regina v Piper.

Hugh and Milan approached both cases with care as the defence, and were brilliant in guiding their witnesses through the statements that they had earlier given to the police. The diligence of our team of barristers could not be called into question; it is clear that we have some budding legal talent amongst them!

Witnesses held their composure during some challenging and, in some cases, quite heated, cross-examinations by barristers from other teams (schools). They were excellent in their roles and delivered outstanding performances across both cases. This was something only made possible by the commitment of Matthew, Emma, Jasmin and Olivia in their preparation for trial.

Thankfully, throughout both cases, our courtroom was kept in order thanks to our Usher, Lucy, and Court Clerk, Jen. We were thankful to have such professionals to keep the teams strictly to the order of procedure throughout the trials.

Our jurors had quite the challenge across cases and were faced with tough decisions: were the defendants guilty or not guilty? Connor, Alex and Claudia, joined by other members of our team in each case, were tasked with listening to the evidence presented and ultimately deciding a verdict for both Summers and Piper, which they delivered to the presiding judge.

Whilst our team did not return verdicts that we had hoped in all cases, it is undoubted that they had delivered a phenomenal performance. Miss Hall and Miss Brewis said, “We have been delighted to see the team progress in their preparations and develop their understanding of the law. We were not surprised to hear feedback from the judge that the performances delivered were reflective of students who are exceptionally talented in the legal field and have a promising career in law ahead of them should they choose to pursue it!”

Roll on next year!