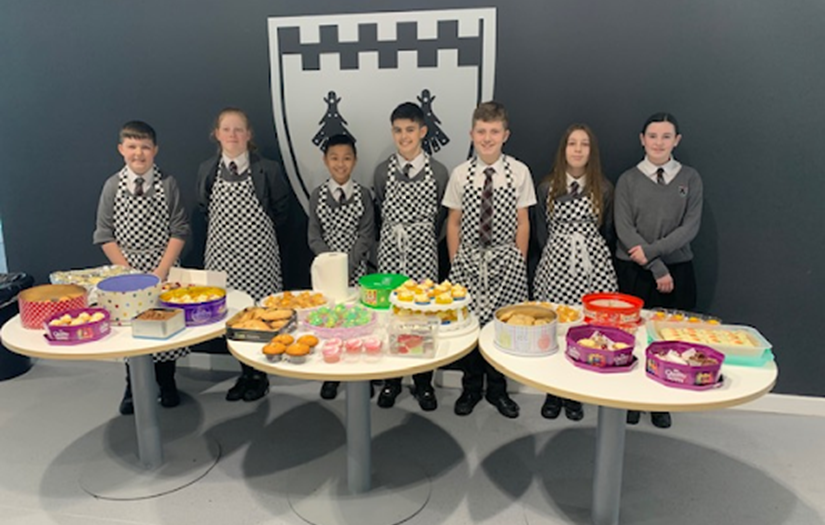 As the war in Ukraine unfolded, students in 7NCA felt that it was important to help those in need and somehow raise money for a supporting charity. Many ideas were created, however one stood out from the rest, a bake sale! And so the date and time was set and everyone got to work baking, and buying sweet snacks and making promotional posters.

Firstly, students created designs for posters to raise awareness about the event. Multiple drawings were generated, some digitally and others physically. Many amazing posters were produced that looked absolutely incredible! The date was set for Thursday 7 April and jobs were handed out the day before the event, some people handling deliveries and others selling the baked goods.

Finally, the date arrived and there was much excitement around the school. Lots of people brought in small amounts of money to buy a cake whilst others brought in large amounts in aid of supporting Ukraine. 30 minutes before break time, 7NCA students left their classes early to set up the stall. As the clock turned to 11:15am, children of all ages rushed to the dining streets to buy a sugary snack to eat. Queues were so large that the tables were not visible from the dining streets whatsoever! Within 15 minutes, all the cakes were sold out and the whole venture was a great success!

Overall, 7NCA raised just under £250 for the disaster emergency committee (DEC). The event was incredibly successful and all the students were exceedingly proud of their achievement. All the money raised will help people in Ukraine and will go towards food, shelter and support.